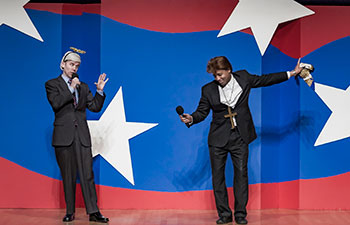 Putting the “mock” in democracy for more than 30 years, Washington’s premier political satire troupe, the Capitol Steps, returns to Merchant Hall for another roasting. No one on the political spectrum is safe from their clever parodies, hilarious skits, and tongue-in-cheek musical numbers. The Capitol Steps has recorded more than 40 albums, including their latest, The Lyin’ Kings. They have been featured on NBC, CBS, ABC, and PBS, and can be heard twice a year on NPR stations nationwide during their Politics Takes a Holiday radio specials. “An oasis of good-natured ribbing in a fiercely partisan world.” The Washington Post