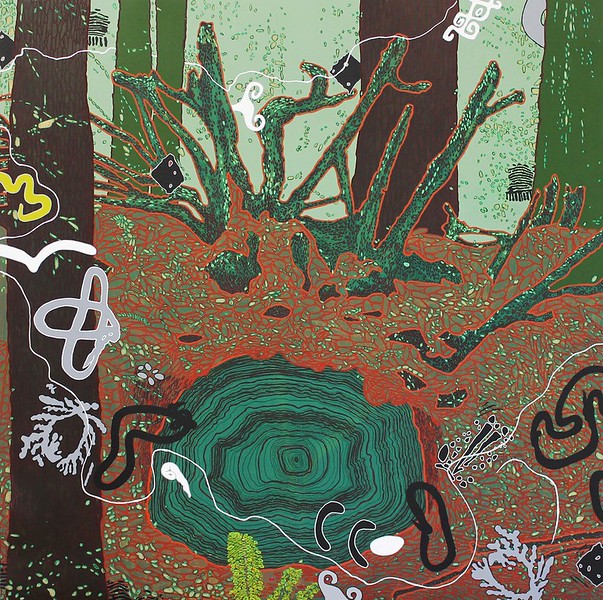 This exhibition features a range of recent artworks from the mixed-media artist and printmaker’s oeuvre. Underwood’s art is defined by the subtle and sophisticated use of materials and abstract forms to evoke spiritual, linguistic, and natural phenomena. A main theme running through all of Underwood’s bodies of work has been the use of her own unique symbols that she developed early in her career.  Starting with Japanese kanji, it is built to include unique signs of music and movement, as well as symbols from ancient caves and rock carvings. Throughout her career, Underwood has incorporated and developed these symbols into distinct series of artworks with content and imagery that span ideas related to prehistoric signs of life, lullabies, the female body image and its representation, communication and conflict, and most recently trees and their relationship to humans and climate change.

Patricia Underwood has exhibited nationally and internationally, at venues including the Corcoran Museum and two solo shows in Warsaw, Poland in 2007. Her work is included in numerous private collections including the Artist's Book Collection of the National Museum for Women in the Arts, Washington, D.C., and several other institutional collections. Underwood obtained her BFA from Miami University, Oxford, OH, and her MFA from Washington University, St Louis, MO.  She has taught drawing, printmaking, visual foundations and color theory at several schools, including the Maryland Institute College of Art in Baltimore, MD.  Her studio/home is located in Castleton, VA.  She is represented by Haley Fine Art, Sperryville, VA.