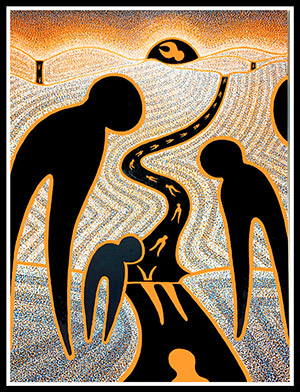 “The Digital Age has brought upon us a binary kaleidoscope fog blanketing both perception and reality.  I think of my artwork as not only beyond the fog, but also behind the curtain of technology. “

Wayne Paige creates dream-like drawings and paintings which feature mythical but familiar landscapes of mountains, waterways, and woodlands inhabited by expressive silhouette-like figures that seem to pulsate with energy and inner light. The artist deploys elements of science-fiction, humor, and visionary imagery to slyly comment on digital technology’s transformation of our psychic landscape. To depict these scenes, Paige uses a pointillist style of mark-making, recalling the work of artist George Seurat while also referencing the pixilation of digital imagery.

In the drawings featured in this exhibition, Paige’s characters are in the midst of crisis, as a celestial armada and its invading forces attempt to colonize their lands and entice the unsuspecting inhabitants with gifts of digital devices. The paintings feature similar characters in a variety of configurations and activities as they confront the inexplicable realities of a post-bucolic civilization.

Wayne Paige has been an exhibiting artist since the early 1970’s. He has been the subject of twenty-five solo exhibitions and has been included in numerous gallery and museum exhibitions at venues such as The Corcoran Art Gallery, The Anderson Gallery, and The Katzen Arts Center.  Paige studied at The University of Illinois (BFA Painting), The George Washington University (MFA Painting), and The School of the Art Institute of Chicago (TICA). Currently, he teaches art at Lord Fairfax Community College in Warrenton. He lives and works in Washington, DC.