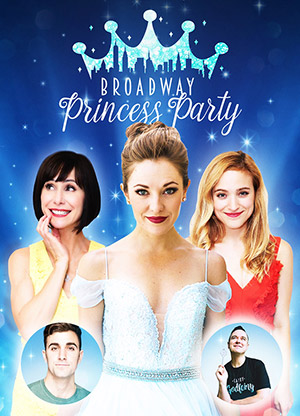 This performance is cancelled. Information for ticket holders can be found here. If you have tickets to a performance that is cancelled, you will be contacted by Hylton Center Ticket Office with details about your tickets.

Dust off your tiaras and head for this charming concert in which three of Broadway’s original and most beloved princesses perform their signature songs as well as many other treasured musical theater numbers. Two-time Tony nominee Laura Osnes (Rodgers and Hammerstein’s Cinderella), Tony nominee Susan Egan (Disney’s Beauty and the Beast), and Christy Altomare (Broadway’s original Anastasia) join forces to host this fun-loving royal soiree alongside Benjamin Rauhala (Broadway’s Fiddler on the Roof). Perfect for grown-ups, especially those who love fairytales, this performance features three knock-out Broadway voices singing every princess song in the book while also sharing hilarious backstage tales. Bring your besties, your family, or any Broadway lover who will be tempted to sing along with the show, which critics are calling “spectacular,” “enchanting,” and “empowering.”

Dream of becoming a Broadway star? Enter the Unleash Your Inner Princess Contest talent search for a chance to sing on stage with your favorite Broadway princesses in Broadway Princess Party at the Hylton Center on March 29!  Contestants can be any age (with parent/legal guardian permission for singers under 18) to participate. Guest winners will join the cast on stage at the Hylton Center to sing a solo, receive a pair of tickets, and take home some BBP swag! Head to https://broadwayprincessparty.com/unleash-contest/ for full contest rules and instructions. Submission deadline Tuesday, March 10.